"Club Fight" Oil on Linen, 34" x 82" by Garin Baker, 2010
With a Grand Opening planned for September, Highland Art Gallery, now in it's new location in Bernardsville, NJ, will be exhibiting two large sports paintings I completed in 2010-2011.
The first one pictured above and detailed below is a scene I started back in 2009 when a long time dear friend invited me to a boxing match of a young fighter and golden gloves champ her boyfriend manages and trains. 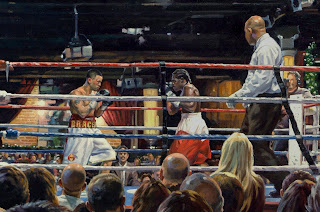 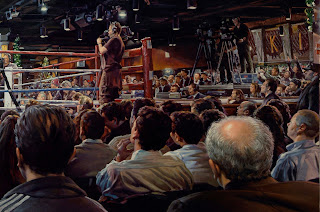 The Broadway Boxing Club is located in the basement of steak house restaurant on 42nd St. in NYC. Transformed from an old discotheque, still with the mirrored ball hanging in the center of the composition is this tight arena space.  Down a dark staircase, where crowds come from across the five boroughs of NYC to root on their neighborhood favorites. 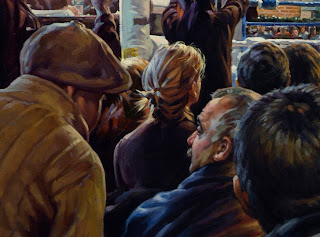 Stock brokers, celebrities and a regular folk are served up a good steak diner and drinks as they watch the evening's card, (a series of boxing matches in successive order, fly weights to heavy weights).
I was captivated by this treasure trove of subject matter, exciting all my senses, compelled to paint for the next few weeks back in my studio from compositional sketches and literally countless digital images, working out and combining like a puzzle all the amazing elements into this multi figured composition, attempting to capture the energy and flavor of this amazing and interesting place with all its characters. 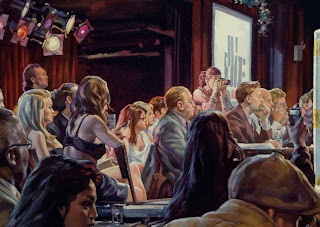 In 2010 it was awarded Best in Show from the National Art Museum Of Sports and the original was exhibit there for almost all of last year and now back on the east coast and can be seen at Highland art Gallery along with a group of smaller works and the other sports painting I completed in 2011 entitled,
"Rangers Vs Flyers" that I will feature in my next post.
Stay tuned. Thanks so much for taking the time to enjoy!
Posted by Garin Baker at 7:33 AM