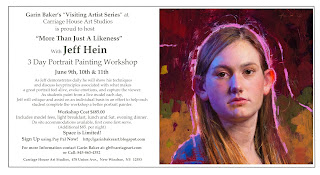 Hein strongly values handmade things, in other words, thing made without the aid of machines. He feels that art can tell a story about the life of its creator especially if that artist intimately experiences his subject matter.  This is why Hein is passionate about working only from life or imagination in his work. He sees each painting as a personal record of his experience with that person, animal, landscape and even with his thoughts alone. To him a painting/sculpture is about more than the finished product but about the journey through its creation.
Posted by Garin Baker at 10:36 AM