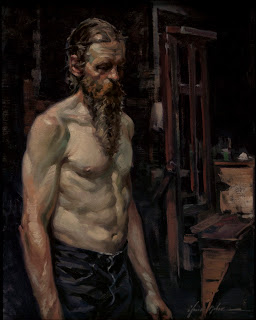 Earlier this morning I received an e-mail from a young artists/student interested in the discussions of late and wanting to know how to be a "realist painter".  And in light of the passing of Robert Hughes, Writer & Director of "The Shock of the New" passionate critique of "modern art", I thought i would take a break from the easel and write a brief diatribe of my thoughts on the progression and development of "Contemporary Realist Art" in our times, in relationship to this question.

I've been Realist Painter making my living as a professional Visual Artist/ in various disciplines for almost thirty years, my perspective is just that,.... mine alone, for what it's worth.

It's always interesting to me the definitions we use when we refer to all representational painting as "Realism" and maybe it doesn't matter much these days when the english language is abbreviated down to a text message, a tweet or a clever post, but some, as I still believe, "Art History" and where things have come from and gone is still important as we refer to our collective history with honesty, respect or sheer intelligence.  For not being aware of one's history leads to a replay of all the wrongs committed or doing things the same over and over and expecting different results is a definition of stupidity.

So as briefly as I can, Realism in Art/ literature has to do with a form of work that was reacting to the Salons, Academies and intellectual thought in Europe during the middle and later half of the 19th Century. Some Artists during that time were tired and frustrated by the commercialized, beautification and highly stylized view prevalent in the classical and romantic forms of art.  A growing bourgeoisie/ middle class or merchant class interested primarily in working speedily and tenaciously towards climbing into the upper class while holding disdain and contempt for the poor and working class.  The intellectual rational most readily used, holding in high regard art that "rose above" the common everyday lives of the many. This appealing nature stressed the romantic, spiritual and poetic reflected by much that went into the creation of countless works prior to the Realist Movement, obviously intended for those who could afford it.  "Realism" stove to portray life as it was, without embellishment, stylized or ideological point of view. Many artists confuse this period of Art with Social Realism which sought to create works that advocated an empathy for those less fortunate, raising the level of "truth in art" as an Idea or concept with a political or social message,  The Realist Movement allowed and offered permission for artists to work with total "freedom of expression" portraying their lives, experiences  and personal passions without adherence to patrons, acceptable subjects and ideological persuasions. The power of personal individual expression in the history of art was realized.  Briefly and by a few dedicated artist, notably and early on by Gustauve Courbet in addition, a bit later on like Sargent, Sorrolla, Repin, Shiskin, Kromskoi, Kroyer,  and many other commercially successful artist of their time who were able to create works apart from their commissioned works into the late 19th and early 20th Century. And for that matter many contemporary realist artists to this day, whom are admired and respected.

Interestingly, not much has changed since then. Yes, we've had more than 100 years now of "Modern Art" relegating the most talented figurative artists of the late 19th and early 20th century to the illustrative commercial arts, i.e. "The Golden Age of American Illustration".  What I find most curious is that when Realism of the late 19th century began to pick up steam and get major attention the art world moved rapidly towards non objective and interpretive forms of art and literature.  Another interesting and historically accurate fact is that during the tumultuous sixties and seventies of the 20th Century, when the cities were burning with racial strife and political protests against the Viet Nam War were in full swing,  the art held in the highest regard by Western  museums, curators, collectors and the intellectual elite was Minimalism and Andy Warhol. Coincidence or just happenstance.  I'm not  a conspiracy theorist,  I'm just looking at history and making an observation.

As an aside, when I was at Pratt Institute only 30 years ago in the 1980's as a fine art major, many of my art professors seeing that I was interested in painting from life and asking for live models on a regular basis, suggested I would be happier in the Illustration department.  I remained, banding together  a very small group of interested students, arranging  our own models and painting from life to the chagrin and constant theoretical arguments by other students and my obviously, "intellectually superior" professors.

Well I'm somewhat off topic while my personal diatribe continues and my painting is calling me,.. so back to the question at hand by this young art student's e-mail. "How do I learn to be a Realist painter"?  Questions like this are met with a host of questions to the student and myself, but to simplify and why I started this, was to say:

Irwin Greenberg, a great Artist, Teacher and Mentor of  mine, would offer this advise as only a gentile and honored Old Master could.

When I was younger, rendering the life out of works proving how good an artist I was to myself and others,  Greeny would say to me, "Boy, you can render the asshole out of a rhinoceros.  Your painting from your ego and not your heart", because what makes things real is how they feel, not how skillfully realistically you paint with style and trickery. The truth of your work is how much of yourself are you willing to  get on the canvas?  Are you willing to find out what stories about you and your life you are willing to discover and tell. This little tid bit of advise is a great starting point for the discovery of what "Contemporary Realism" is, and can be,
as well as how to achieve it.