The New Englanders
The Tradition Continues. 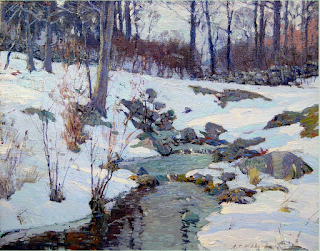 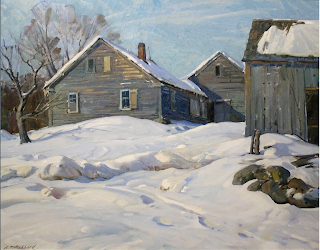 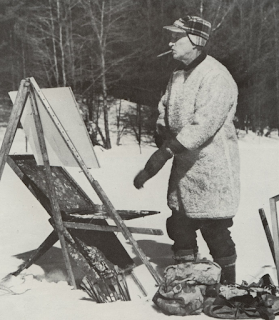 Hibbard was born in Falmouth, MA and died in Rockport, MA. Along with Anthony Thieme,
he was an important founding member of the Rockport Art Association. Hibbard had the
additional distinction of being a gifted baseball player who was asked to join professional
teams. Instead he gave up sports to become a professional artist.

Hibbard studied art in Massachusetts with contemporaries Edmund Tarbell and Frank Benson.
Because he showed great talent, he was given a traveling scholarship from the Boston Museum
School to study abroad. Hibbard became a member of the Guild of Boston Artists, the National
Academy of Design, the Conn. Academy of Fine Arts, the Rockport AA, the Gloucester AA, and
the Salmagundi Club, NY, to name a few.

He paintings were widely exhibited and his works were the recipient of many awards including
gold medals at the Pennsylavania Academy of Fine Arts, the Hallgarten Prize at the National
Academy of Design, and numerous awards at the Rockport Art Association.

Beginning in the 1920s, Hibbard summered in the Cape Ann, Massachusetts area and spent his
winters in Vermont. Vermont was the locale of many impressionistic winter landscapes for which
Hibbard is best known. In fact, he was so adept at painting snow scenes, a review in the Boston
Globe for the 1918 Guild of Boston Artists exhibition noted:

"Hibbard is a realist; you feel the reality of everything he paints,
but the sentiment, the poetry is there also. Others paint snow
that looks like white paint streaked with blue and yellow. Hibbard
paints snow that never looks like anything else but snow...he is...
more subtle and more penetrating in his observation of delicate
nuances of gray, the phenomenon of light on snow." 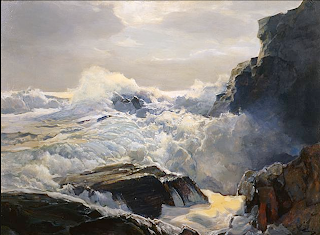 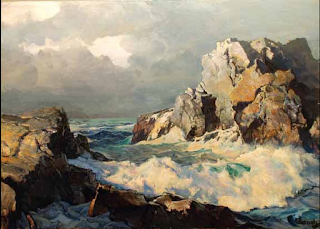 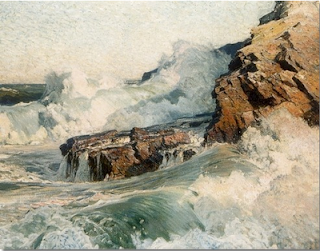 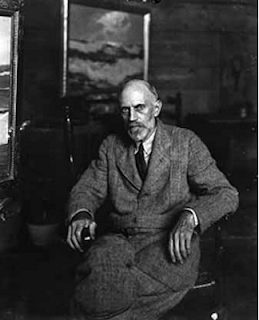 Frederick Judd Waugh was born in Bordentown, New Jersey on September 13, 1861. He was the youngest of five children. His father, Samuel Bell Waugh, was an accomplished portrait painter.

At nineteen, Waugh attended the Pennsylvania Academy of Fine Art for three years, studying under Thomas Eakins and Thomas Anschutz. Upon his graduation, Frederick sought further study in Paris at the Academie Julian under Adolphe William Bouguereau and Robert Fleury.

In 1892, Waugh married Clara Eugenie Bunn, a fellow art student from the Pennsylvania Academy. In 1893, the couple moved to the Island of Sark in the English Channel where they stayed for two years. It was on this island Waugh began his study of the sea. According to the artist, the island was a model for most of the conditions the marine painter needed to study.

In 1899, the Waugh’s moved to Hendon, eight miles outside of London. Waugh began working as an illustrator to support his growing family of four. In 1907, he entered two pieces into the Royal Academy show. They were both rejected, so Waugh decided to return to America.

Waugh and his family settled in Montclair Heights, New Jersey. He found a studio nearby in Montclair. It was the former studio of Gorge Inness Jr. and could accommodate the large paintings Waugh had planned to paint. The artist bartered his rent for one painting a year.

Waugh always painted from direct observation, but these studies were not for sale. Instead, Waugh used the studies, along with his memory of the experience to create finished paintings in the studio. His large studio paintings have a power and majesty rarely captured by most marine painters.

Frederick Waugh died in Provincetown, Massachusetts on Sept 10, 1940, at the age of seventy-nine.

Continuing and Passing the Torch 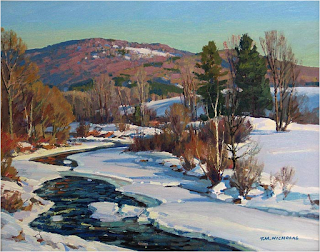 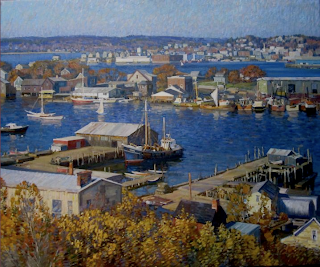 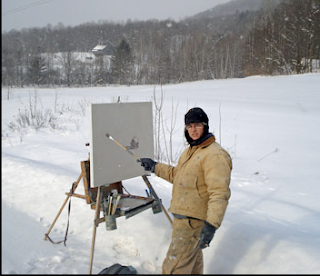 Born in Rockport, Massachusetts in 1963. T.M.grew up admiring the rugged beauty of the northeast coastline of
the United States as well as the majesty and diversity of the northern New England landscapes. His father, esteemed painter, Tom Nicholas offered advice and encouragement to his son early on. And over the years T.M. developed his own individualistic style to become the plein-air painter he is today.
T.M. studied under John Charles Terelak at the Gloucester Academy of Fine Arts. He also studied under Boston area artist George Gabin at Monserrat School of Art, with emphasis on realistic painting and drawing. T.M. is a member of Rockport Art Association, Guild of Boston Artists, Whisky Painters of America, Hudson Valley Artists, Allied Artists of America, Academic Artists, Artists Professional League, New England Watercolor Society, and The North Shore Arts Association.
T.M. Nicholas is considered by many to be among the most prominent painters of his generation. He has won over sixty awards, the first at age 19. TM’s work can be found in many private and public collections to include the Peabody Essex Museum, Salem and Cape Ann Historical Association, Gloucester. TM is regularly sought for teaching and painting engagements both nationally and around the world and has a truly international reputation. 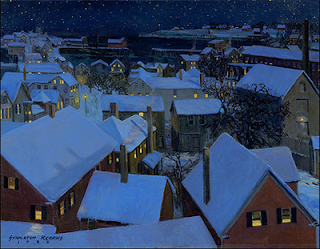 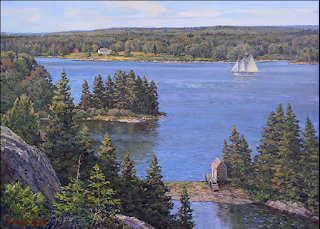 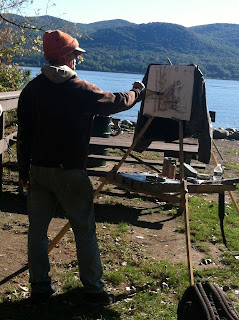 A master craftsman, Stapleton Kearns is a firmly established contemporary American Artist. He is a lavish and eccentric individual with high standards of professional integrity who will not skimp on time or detail in his work. "If it isn't and A then it is not art." Having been a part
of R H Ives Gammell's atelier in Boston in the 1970's, his home is in New England.
"I was born in 1952 in Rochester, Minnesota. Even as a child art came naturally to me. I loved the paintings in my mother's antiques magazines.
In school, all day long, I drew behind my books, creating thousands of drawings and earning dreadful grades. Some years later after several years of art school, where the approach was typically more modern than I desired, I moved to Boston and was taught at the Fenway studios by R.H. Ives Gammell. Ives Gammell was an elderly painter who had studied with the famous American impressionist William Paxton. Ives taught in the classical manner of the nineteenth century. We drew plaster casts in charcoal for months before moving on to study the figure. He stood next to us and corrected our drawings, teaching us to 'SEE.'Some time has past since then, now I'm nearly thirty two feet tall and weigh over 1900 pounds. I tell people if I'm awake, then I'm painting."
—Stapleton Kearns

Stapleton Kearns is an elected member of the Guild of Boston Artists. For five years he served as president of the Rockport Art Association. Twice his paintings have been included in the Biannual Show at the National Academy of Design in New York City. He is a member of the New England Plein Aire Painters.

Stapleton's paintings are dynamic and imbued with rich, poetic, emotion. In their dramatic beauty we see a reflection of his training, his character and the depth of his artistic creativity.

It was my distinct pleasure to have hosted Mr Kearns this past weekend at my Carriage House Art Studios for 3 days painting the Hudson River Valley. The amount of instruction during 3 full days of painting out doors along the River with Stapleton and the participants was truly wonderful and amazing.  He  did a demo every morning and then visited each student at their easels with in-depth advise and guidance towards better understanding and methods of direct observation, composition, materials, palette organization..... I could go on and on.
After diner we were treated with slide shows and lively discussions of great artists and their works and stories of their lives, told by only in the way Stapleton can, that he's accumulated along his most amazing journey of his life as an Artist, teacher and internet blog, tour de force.
http://stapletonkearns.blogspot.com/

In the works are several trips being planned this winter to the same painting grounds and locations traveled by Hibbard, Waugh and many other great New Englanders.
If you are a serious artists and interested in joining us,
contact me at: gb@carriageart.com .
I'll keep you abreast of the dates, times and places in New England we plan on painting this Winter!

Get you winter gear ready!