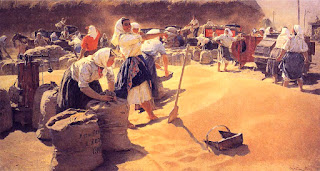 This amazing painting by Tatyana Yablonskaya "Sacking Grain" 1949, showing a faithful rendition of the heroism of Russian Women during World War II.  This painting composed during the hight of the USSR Social Realist Movement bolsters the staunch adherence to a political point of view.  Yablonskaya portrays in grand style the devotion and conviction of this movement in rich color and human narrative. Agree or not about the politics or historical categorizations, this work of art created for whatever reasons stands out in my opinion as one of the finest large works of the 20th century.

I first saw it reproduced in a book that's been on my studio shelf for as long as I can remember. (The Tretyakov Gallery, Moscow, Published 1979 by Aurora Art Publishers/ no longer available)

This work  is so naturally composed, without contrivances or forced over the top emotions.  The harmonious placement and arrangement of figures and forms, quite difficult to do from life, drawings or reference material, and pull it off in such a convincing manner.  Even the huge smile on the girls face as she relishes in her labor as a completely fulfilled proletariat.  It's done in such an uplifting and humble propagandist way, almost spiritual. This painting for me transcends it's momentary time and place and creates a universal story of women's' humanity and hard work.

But what especially knocks me out about this painting artistically is the rhythm of how the figures are used to travel your eye across the picture plain as well as the color choices through the use of bright warm sunlight bouncing from the piles of wheat grain on the ground, creating a multiplicity of rich colors as it reflects on the under-forms of the figures and object receding into space and atmosphere as the grain dust fills the air. Truly Masterful!

Well one might ask, beyond this wonderfully done painting by a woman in the 20th century what make it relevant today?.

Maybe in light of yesterdays historic moment in the halls of the United States Capitol seeing so many of our elected representative being women, assembled for their first day of the peoples work. That alone could be enough to make this painting resonate, symbolically.

Yet artistically, this painting in simple terms, harkens back to an era of compositional intent and the need to create works of art that go beyond shear beauty as an end to it's means.

There's much discussion as of late about what the purpose of painting is other than in a stylistically pleasing and clever ways towards creating works that are simply beautiful.  For so long, countless works heralded as "modern" masterworks of ugliness and human strife or conceptual "riddles" for intellectual superior audiences to commodify and appreciate, have held the stage.  But now all around us were seeing the technical mastery of painting realistic imagery once again.  Countless artist today are amazingly handling paint in a virtuosity of color and "Real"form.  Yes, a thrill to see, and I'll be first one on line at MoMa for the "New Modern Art, Representational Exhibition"..........
........when a brave new curator makes it happen.

Although as I look around much of todays contemporary representational work is done with subliminal, and underlying narratives of mood, presence and style. Many deeply intellectual realist artist think through their shear skill, ego and brilliance they can convince and compel the gate keepers of our major museums and higher echelons to loosen their locks. Maybe in time as audiences thrust for it.
For me this form of representational art in its singularity of form, its simplicity of compositional approach is not enough.  These works of sheer beauty and technique cease to convey anything deeper or more meaningful than as a means towards offering pleasure to the eye and senses, a hierarchy of appreciation for it's creator and esthetic entertainment sharing little about the artist's humanity and soul.

Now don't get me wrong and get all twisted behind my thoughts,......

No matter how one might want to dispel and marginalize Yoblonskaya on political and social dogma  or the countless realist artist and their attempts with ambitious, difficult compositions, telling a human story and personal vision of or a collective truth, while using a multiplicity of skills, figurative, landscape, atmospheric and narrative, .....speak to more.