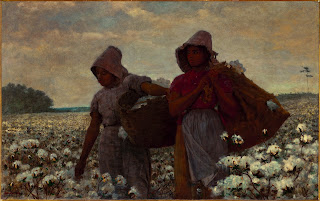 A powerfully amazing and wonderfully exhibition is now on view at the Smithsonian American Art Museum in Washington, DC.  I was lucky to catch a Cspan broadcast of the Curator, Eleanor Harvey highlighting and discussing this Exhibit.

Except from The Smithsonian American Art Museum web site:
"The Civil War and American Art examines how America’s artists represented the impact of the Civil War and its aftermath. Winslow Homer, Eastman Johnson, Frederic Church, and Sanford Gifford—four of America’s finest artists of the era—anchor the exhibition. The exhibition follows the conflict from palpable unease on the eve of war, to heady optimism that it would be over with a single battle, to a growing realization that this conflict would not end quickly and a deepening awareness of issues surrounding emancipation and the need for reconciliation. Genre and landscape painting captured the transformative impact of the war, not traditional history painting".
http://americanart.si.edu/exhibitions/archive/2012/art_civil_war/#tour

Harvey went on to explain in beautiful depth and detail the human stories and conflicts ongoing as these creative visionaries responding to and anticipated the power of current events with "real" symbolic human narratives of poetry and truth.  The exhibition communicates human stories through landscapes, genre scenes and photography, purposefully telling of their times, as they attempted to make sense of a world in complete upheaval and bloody strife. 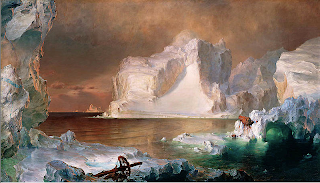 In one example, I was struck by the power and purpose of Eastman Jonhson's Negro Life at the South, 1859 oil on linen, 37 x 46 in. 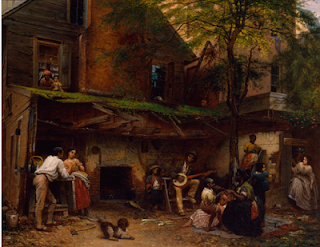 Obviously done just prior to the War's beginning, this painting poignantly shows a simple scene of life on the plantation from the slave's quarters.  Johnson portrayal is layered and powerfully meaningful.  Not lost and clearly painted are the multiethnic and varied skin tones of the characters depicted. Also if one looks closely and follows the transverse and paths taken, you can see through open windows, ladder leaning on the main house and open doors, Johnson use of clever symbolism and human narratives, the mixed race and relationships of a usury family heritage explicit yet hidden on Southern plantations.  At the time this painting was exhibited, it must have been quite unsettling, as one unravels the painting's seemingly normal and tranquil moment.

This exhibition is filled with countless layered examples of incredibly works like Johnson's if willing to look more deeply into the artist's mind, methods and purposes.

As an artist inspired by these works it is clear to me that our times are filled with much of what existed then. Yes bloody wars are now fought far away only to be witnessed on smart phone through real time technology.  But all around us our everyday lives are filled with powerful stories of human relevance left untold. Works by representational artists inspired to do more, could go far beyond the "beautiful",  escapism, entertainment, personal skill promotions, contrived and phony symbolism used as vehicles towards "success" ultimately irrelevant in time.

"The Civil War and America Art" Exhibition and the in depth way curator Eleanor Harvey has shown  us, is a benchmark for artist and viewers to learn from.

Hopefully inspiring us all to create works that reach to a human place, expressing an honest portrayal of our current personal or collective existence.