From The Studios of Garin Baker
Blog Post
December 9th 2013 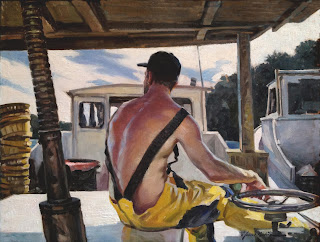 This year I traveled to several Plein Air events through out the United States including Maryland , Vermont and California. Quite wonderful to be juried in and invited to these amazing locations to paint in the open air for a few days and participate in various competition, exhibitions and sales.

In the old days we called it  "painting out doors" and it was primarily an exercise towards a greater understanding and study of  light, color and atmosphere.  Many of these studies upon returning to my studio were strewn on the floor to be swept up, tossed away or painted over.  So it wasn't until a close friend of mine invited me a few years back to a plein air event  he was organizing as a fundraiser for a local arts organization, that I began to learn more about "The Plein Air Movement", which has become quite popular over the last decade or so.

Known by many as the premier Plein air Event, Plein Air  Easton, in Maryland is heralded as the best. Now in its tenth year, I entered in the prior 3 years and was rejected each time.  It's ferociously competitive.  Only fifty artists are selected each year and a number of the slots are taken by the previous year's award recipients.  The fortunate ones make there way to Easton, Maryland during the searing heat of July, to paint along the shores of the Chesapeake Bay in one of Washington, DC's most affluent suburbs.  This amazing event is sponsored by The Avalon Foundation and is recognized by art collectors and plein air connoisseurs as the best invitational, boasting record breaking sales, year after year.  Each artist is offered housing in the most amazing properties and homes in the area and treated to an array of gracious invites and wonderful activities.  This past year I was fortunate to be juried in and invited to stay at a magnificent property with a fabulous guest house.  Upon arrival I met  all the other artist.   A bit intimidating,  I must say.  A cornucopia of talent, having seen many of these artist's works from past years as I sat on the sidelines.

My first day there  I felt like a lost puppy driving around trying to find something to paint.   Eleinne Basa, a wonderful artist and friend, in addition to Plein Air Magazines, 2012, 1st place prize winner, toured me around showing me some amazing vistas and harbor scenes, worthy of starts .  And that's just what I did,....starts.  The first couple of days I began several paintings and wiped them all out.   Watching artist like Ken Dewaard attack the landscape with bold confidence, devouring  rich colors off his, trademark, hand held palate, was inspiring.   I came across  Steven Griffin one afternoon, with  cigarette ash dangling, he painted bold compositions with energy and purpose, using pure rich colors that I would never dream could work as harmony.  He glanced over as I watched, basically saying without words, what are you doing watching me?, go paint!.  In my head I was saying,  what am I doing here", these artists are in their element, I'm just practicing.

One morning painting alongside Ken, he said "go down to the end of Chew Street, the morning light there looks like a Maxfield Parrish".  So there I went . The reflections in the water and the boats at the end of the dock were marvelous.   The light was wonderful, a beautiful vista in the distance.  I painted their all morning and was finally on to something special, or so I thought. 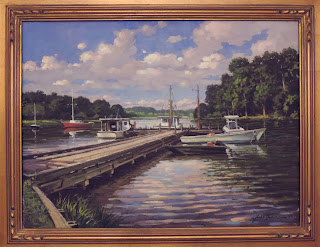 At about noon a young man came off one of the boats and started walking towards me down the dock, I was focused, so I paid little attention.  He came along side and said, "What are you doing?"   As I turned to say, I'm painting, he said "cool", as he looked over my shoulder.  I stopped to say "thanks" and was struck by this young weathered 20 something year old who was right out of a casting call for "Deadliest Catch".  Perfect character for an interesting painting or study of a young fisherman, I thought.   I asked him his name and what he did.  He said "Dustin, I'm a crab fisherman", and I said, "of course".   His attitude seemed to change as he took a step back.  I wasn't gonna waste time with pleasantries,  so I just blurted out, "hey, would you pose for me".  He took another step back.  I said, "no, no, No, I'm a professional, I'll pay you" !.   He paused for a moment and said, "how much"?  I said, "$20 bucks an hour.  I need you for 3-4 hours".  He thought for a moment and said........"sure , OK".  We made arrangement to meet the next day at the same spot.  I wanted to finish what I was working on and he said he was working the next morning.
Now I'm in my element, hoping he would be there?

The next day at the end of Chew Street I finished my painting. (imaged above)  Dustin was not on the boat and I thought dam, he was blowing smoke.  As I was putting away my paints  a pick up truck pulled up and Dustin jumped out.  "Didn't think I was coming?" and laughed.  He said his captain on the boat was cool and offered to help carry my gear. Awesome!

The painting done  of Dustin, an Eastern Shore "Waterman", they're called, depicts on a bright sunny day, shaded by his canopy, a classic back view of a young crab fisherman.   He was incredibly generous and sat for several hours, with only a few breaks,  His captain joked and jeered him in addition to telling the most hilarious stories about the lives of Maryland's Crab Fishermen.

I could not imaging a better way to spend an afternoon while gaining this most human insight into the lives of hard working "Watermen" as they labor and raise their families, offering up the most the most delicious maryland crabs for our tables.  This was reward enough in addition to competing along side some of the most respected artist in the US during the week's end exhibition and sale. The Avalon foundation and all of their hard working volunteers put on the most incredible events through out the week.  The Museum quality exhibition is of the highest caliber raising the art and the artist involved to pedestal level.  Most definitely what sets this event apart from the rest.

The juror for selecting the winning paintings was Donald Demers , one of the most acknowledged and respected contemporary American landscape Painters.  Here's a video link, (below) where he graciously and eloquently expresses his reasons for selecting my painting "A Buck Twenty A Bushel" as this year's Grand Prize Winning Painting.

Also a link below to this past year's Collectors Party and Award"s Celebration.

Hoping you enjoyed my story of "Wipe outs and Glory" at PLein Air Easton 2013
and don't forget to sign up for my "From the Studios of Garin Baker" Newsletter at:
http://www.garinbaker.com/#!/contact