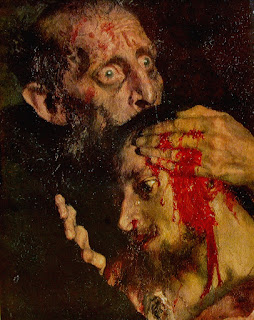 Detail, Ilya Repin. "Ivan the Terrible and His Son", 1885. Oil on canvas.
This Amazing painting by Ilya Repin tells the dramatic and historical story of Ivan the Terrible. After bludgeoning his son to death he cradles his head in horror symbolically expressing in a powerful simple way the timeless story of The First Tzar and Supreme Russian Leader, now old and completely mad. Ultimately through his life, the quest for total rule and complete domination, destroyed everything in it's path.
This incredible and powerful portrayal along with many of Repin's work I first came across as a college student years ago.  I was directed by an instructor of mine at the time to a Russian book store in NYC located near 21st and Broadway( no longer there).  I spent days combing through books on Russian Art. Maybe I had an affinity to their works since my Grandfather emigrated to the US from Russia around 1902 and I was told stories by my father of our Russian heritage.  But as an Artist what strikes me so profoundly to this day, is their abilities to master the technique of most european traditional and impressionist artists we're so familiar with and bring such depth and soul to their works expressing a narrative that speaks to the hearts and minds of the subjects depicted. The "Truth of Purpose" blended with such soul in a way that is continually compelling to me and still so powerful to this day. 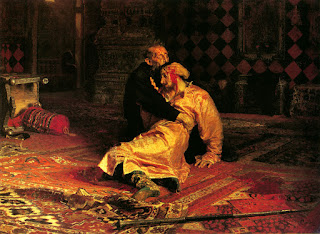