Completed in 2007 by myself and a team of 7-10 artist in a 5-6 month time frame not including presentation approvals and fundraising which added another 3 years to the project
done by a Not for Profit organization named Trestle Inc.
Be that as it may I'm prefacing everything I'm about to reveal with the most important fact. Every exterior mural project is Unique!
Site conditions, Climate, Wall surface, building or retaining wall, stucco, concrete or brick. Hight from the ground, ability to use lift equipment or scaffolding. I could go on and on.
But to keep it simple let's use the Trestle Mural Project as an example.
Which I consider a huge failure as a permanent exterior Mural which basically should have a life span of about 25- 30 years if all the prep work was done correctly, which it was not on this project by a long shot!
A moisture ridden retaining wall which needed a thick parged coating of a moisture barrier material applied consistently before we started priming & painting the mural.
It was only after we started painting the mural did we realize the City of Newburgh hired a contractor who owed back taxes to do the job and as he worked from left to right he skimped and cheated all who loved the project and now see it presently, can only imagine a beautiful work of art that should have lasted.
I'm sorry to inform all who are interested that the Murals present condition is irreparable and large sections need to be removed.
Anyway here's how we did it.

The presentation of the design for approval and fundraising purposes. 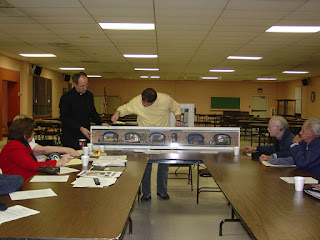 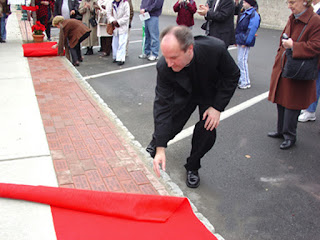 Mural Painting work begins on site, Scaffolding is erected, The art shed is strategically placed and all the artist working get paid and have health insurance. Yippee! 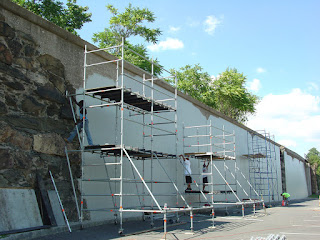 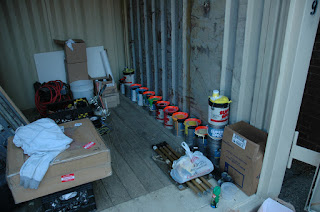 Our palettes are constructed on site using 4 x 8 sheet of plywood cut in half.  Then cutting 12 wholes around the top perimeter in order to allow for chinese soup take out dishes with lids to be dropped into so that they don't fall through.
The paint I used on this project was a Benjamin Moore product called Impervo, Oil Based Alkyd Enamels. Very durable with light fast colors with a polyurethane binder, gloss finish. in a wide range of mixable colors.This paint is used commonly by exterior sign painters also sometimes applied to US Navy ships and industrial machinery.
The colors I choose range from black to white and cools to warms similar to an impressionist plein air painters palette from light to dark and warm to cool. Also I like using the primary colors or as close as I can get them since I can basically mix anything else freehand simulating the illusions of light with color. No pre mixed colors for me bro! Cheep Home depot Turpentine as thinner and big fat chip brushes. We go through allot of them.
Long flat Bristle brushes for the figures and some finish work but I stress to the apprentices and other artist working if I see you in any one spot noodling details too long your climbing high up on the scaffolding to clean brushes one at a time.
Fast and loose is how I paint catching the lights, shadows and right details with one stroke. Sargent and Sorolla baby! I used to render when I was younger, Don't seem to have the patience anymore. Too many walls and paintings I want to do,I guess. 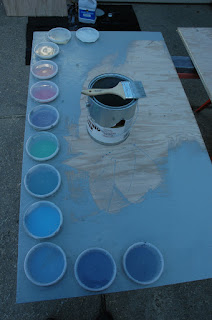 Amazing site along the banks of the Hudson River about 60 miles north of New York City Is where the fun all happened. 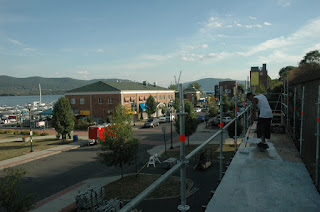 We started with the faux stone work accomplished in a fast and amazingly easy technique.


A turpentine wash of what ever color you pick on you palette mixed with it complimentary color varying the degrees of warm and cool temperature is applied to an area a wide as you can reach from left to right from top to bottom letting the paint run down creating basically an abstraction of mess and drips. Just a bit of time for the turpentine to evaporate and just the pigment is left for you to work into making sure not to over brush it.   Then cut in with a gray to white mortar lines varying you brush thickness. Think organic shapes working you negative space to create interesting stone and rock shapes. Lay in some deep cool shadows on the bottom of the stones as they appear and some high lights and variate some middle tones on top... play play play. keep it loose, and keep moving.

Wonderful Nancy Stonecypher muralist and faux finisher picked up the technique in no time flat Awesome! 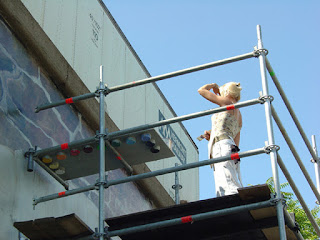 Natalia Zadnovskia expressionist and theatre designer artist from Russia via Brooklyn, mastered the technique and could compete a 20 ft square section every day. Amazing to watch her. 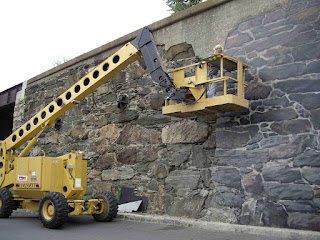 At night we used a digital projector and lap top with our previously completed compositionally approved designs and projected the archway areas onto the wall, measured and scaled so as to not deviate from the overall schematic. One of my past students at School of Visual Arts In NYC whom is a colleague and amazing painter in his own right David Penna checks and lets us know all systems are go. 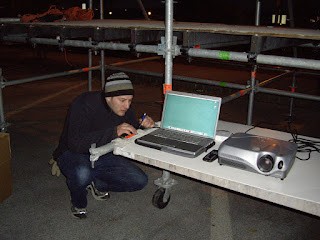 Then with a very thinned out turpentine tone we drew out the projected image onto the wall. No need to draw to much since were just trying to get accurate placement and defining where the large lights and shadows are located. Figures where drawn out by me since I was primarily responsible for their accuracy and needed to draw them out with just the right indications since everyone depicted in the Mural is from Newburgh and it was important that they would recognize themselves. 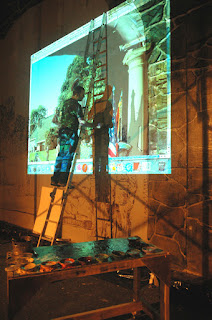 Young paid apprentice Artist Bryan Gugllielmi proved invaluable on this project and I could not have completed it without him.


He was my primary blocker in and lead me from left to right blocking in large masses of freehand mixed colors as I followed tightening and resolving
the form and accuracy. He's been painting from life in my studio since he was sixteen when his mother brought him by saying he was getting into trouble
at school and needed some direction. Bryan is now a muralist with Mural Arts in Philadelphia as well as working on his own paintings after completing his degree
a few years ago at the Pennsylvania Academy of Fine Arts. 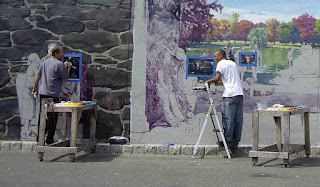 We moved from left to right finishing one Archway design at a time. After a bit of a learning curve we caught our stride and were able to complete subsequent archways in about 3-4 weeks.


Here's the completed Archway #1 entitled, "Washington's Headquarters and some details to follow. 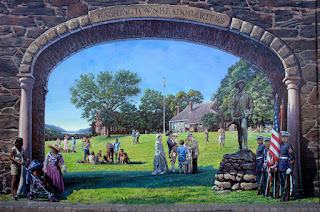 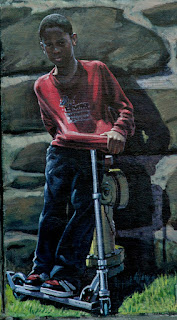 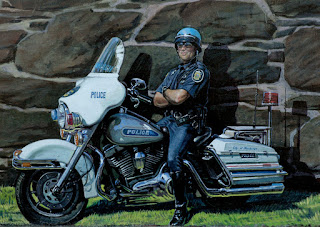 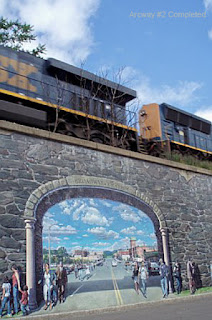 As the project gained steam and we were inundated with crowds that came to watch.


The project evolved into a performance art event on a daily basis. Bus loads  of tourist and class trips arrived and I found out we were added to their route. 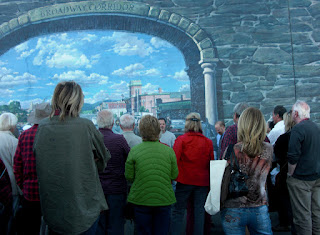 Here's Bryan and I getting a breather as we finish up the last Archway #5. The best part of this   project  was to works side by side with such young talented artists creating something that would mean so much to so many and change the dynamic of a the way people see themselves and their sense of place. 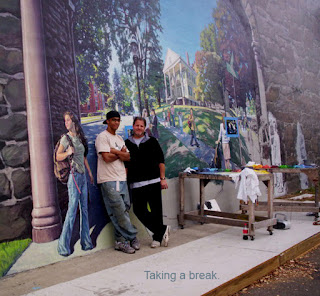 Towards the end our palettes were all signed and were kept a souvenirs by Trestle Inc. 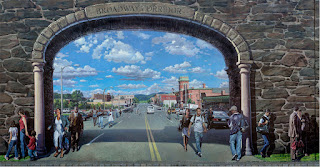 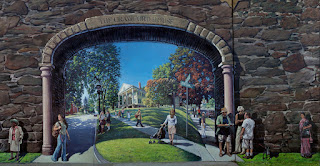 An Amazing and wonderful project that I had the privilege to create.
Even now almost 4 years later, tragically and sadly with a good portion of it deteriorated and lots of people looking to blame and point fingers, and although quite painful to see it in it present condition,
I still have positive feelings about and learned so much.
Specifically,
#1. Don't let anyone else do you prep work!!
#2. Be careful when some one says we'll do it for nothing, you'll most assuredly get what you pay for.
#3 Newburgh, although a great small city, still has far, far to go. When the powers that be realize that the poverty industry presently gripping it's citizens eventually have had enough!,....watch out.  There are wonderful people there and oh so much potential.
Sorry this long post but it was three years of my life and if I still have you attention and you would like to see a 4-5 minute slide show of the entire project from start to finish click here.
Thanks for taking the time to enjoy!
GB
Posted by Garin Baker at 6:40 AM