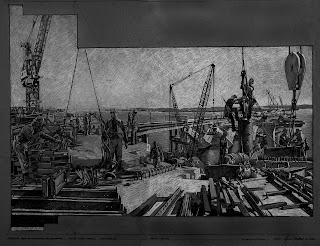 ARTBA Rendering #1 40" x 54", Charcoal on Canson Paper, Garin Baker 2006
The following rendering measuring 40" x 54" was done for the American Road & Transportation Association's corporate lobby Mural project. I was giving the opportunity to see first hand the building of the Wilson Bridge in Washington, DC.  Truly a Modern Marvel of modern engineering and construction.
"Artba" is a huge lobbying organization representing the road and bridge building construction industry. They are responsible for he largest Federal and State transportation construction projects bringing together huge engineering, heavy machinery and tradesmen corporations form across the country.  After being guided by supervisors very concerned with my safety, I spent a few days climbing and traversing this huge construction site, taking photographs and doing quick compositional sketches.  I returned to my New Windsor, NY studio to create this large presentation rendering. This drawing was my first attempt at what I thought would be an amazing heroic mural for their new lobby located in Washington, DC. But it was not to be. The CEO explained to me quite diplomatically, although he thought the drawing was amazing and so thrilled I was selected to create their new mural, the Board of Directors wanted to feature road builders and thought featuring bridge builders would send the wrong message to their vast client base.
So it was back to the Drawing board. Although they paid to have it printed 9 ft. across for an interior space in their new headquarters, softening the blow. 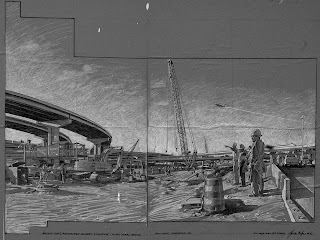 RTBA Rendering #2 40" x 54", Charcoal on Canson Paper, Garin Baker 2006
What struck me when they took me to the second location was the morning sun blasting it's way onto the road construction project called the "mixing bowl" about 5-10 miles outside DC. All the Workers busy starting their day being given directions and tasks to be completed by their supervisors. Usually we all make the typical commentary of one guy working and a group standing around as we drive by wondering what's causing all the traffic impeding our lives but in one shape or form the roads get built and our modern transportation system exists. Maybe a strong case at the moment for upgrading and improving, non the less.
Completed Mural, painted in studio and installed on site 2006.
Measuring, 18 ft at it's highest point by 35 ft. long. 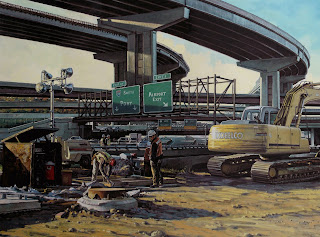 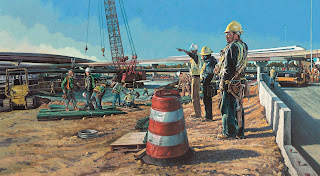 All in all a great project to be fortunate enough to work on and complete. An amazing example of putting an artist in a world that is not their own and letting him loose on a subject matter. My favorite thing!
All work was done through Artist Circle Fine Arts, a Washington, DC based Art Consultant company run by Jack Devine who commissioned the work and was marvelous to work with.
Posted by Garin Baker at 5:46 AM